So, I actually wrote a Chronicle for tonight, but it was incredibly boring and I just couldn’t do that to you…

So, you will get this tonight 🙂

A Neighbor from Hell Novel 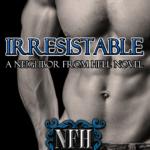 “Melanie,” he said tightly as he stood there, glaring at the apartment door that belonged to the woman that he’d prayed he would never see again.

“I’m not here right now, but if you would like to leave your name and number I’ll get back to you later,” the smart ass hiding behind the door managed to say before adding, “beep,” further convincing him that she was out of her fucking mind.

“Open. The. Door,” he bit out, enunciating every syllable as he struggled to remember that he was a doctor and that he’d taken an oath not to strangle the infuriating woman that was fucking with his life.

There was a slight pause before she said, “Yeah, I really don’t think that would be in my best interest at the moment. So, if you’d like to come back later after you’ve had some time to calm down then-oh, crap,” she finished with a groan when he decided to stop playing games and decided to press his luck and see if the door was unlocked.

He threw the door open to find Melanie standing in the middle of the room, hugging a bag of donuts to her chest, pregnant, and looking completely surprised to see him. Taking a deep breath, he forced his eyes back to the large swell of her stomach and had to remind himself that he wasn’t an asshole.

Exhaling slowly, he dropped his hands away from his face and asked the question that he was afraid that he already knew the answer to. “Is it mine?”

Chewing on her bottom lip as she shifted nervously, she slowly nodded.

“I see,” he murmured, having absolutely no idea what he was supposed to say to that.