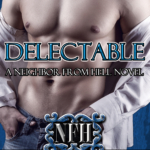 Delectable, the next Neighbor from Hell novel is officially done.

Well, if you don’t count final edits that is, lol. The book is up at iBooks, Amazon.com, B&N, and I believe Kobo for pre-order. If you have links for any of the other ebook stores that are selling it and would like to share, send me an email and I’ll add them.

Thank you so much for your patience and support,

“Seriously, Trevor? No!” she said firmly as she tugged the comforter back up where it belonged and then for good measure, slapped his hand away since he refused to listen to reason.

“You started this,” he pointed out as he ignored her ineffectual slaps and continued to pull the comforter away from her until she lost her grip and was forced to scramble the pillows.

“And I ended it!” she pointed out somewhat hysterically as he plucked the first pillow away from her.

“Whatever you need to tell yourself, baby,” he said with a sigh as he stole another pillow away from her.

“You betrayed me!” she snapped, trying to slap his hand away when he went to grab the last pillow.

“And you have no idea who Loki is,” he pointed out as he snatched the last pillow and-

“Is that Tom Hiddleston?” she asked with a sigh before adding, “I love him,” which of course, was the wrong thing to say.

“And where do they live?” he asked as he tossed the last pillow over his shoulder, grabbed her by the ankle and yanked her closer so that he could reach up and tug the boxers that she’d stolen from him, off.

“Italy?” she said, worrying her bottom lip as she thought about it, making him shake his head in disgust as he tossed the boxers aside, grabbed her ankle and pulled her back before she had a chance to crawl away.

“Is hot?” she said, making this feel all sorts of wrong.

“I-I can’t,” he said releasing her with a firm shake of his head, because he just couldn’t do this.

“What?” she asked, sitting up with a frown.

“I can’t do this,” he said, seriously wondering how he could have married someone that didn’t even know the basics for the Avengers.

Shaking his head, he returned to the bathroom deciding that he’d rather deal with a cold shower than to deal with this. It was just so wrong.

“What?” Zoe asked as she followed him, not understanding, which made it so much worse. “Come on, Trevor. I was kidding!”

“I just need some space,” he said, stepping into the shower, wondering why he’d married her when she went ahead and reminded him. “Oh, shit,” he groaned when she dropped to her knees and make it difficult for him to stay mad at her.