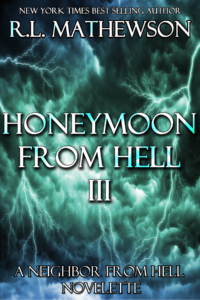 Honeymoon from Hell III is now available at iBooks and Smashwords.com (All formats for Kindle and Nook are available here)

Here’s a little teaser from Connor and Rory’s story, enjoy 🙂

Excerpt from Honeymoon from Hell III

Her stomach dropped at the thought of Connor never coming back. She kept telling herself that Connor could take whatever they dished out and more, but…

What if he couldn’t?

What if they’d finally managed to break him? God, she couldn’t stomach the idea of him coming back changed, which was the only way that she could describe how most of the men came back after the initiation. She wasn’t sure that she could handle seeing a strong man like Connor flinching anytime a noise startled him or find him curled up in the corner, sobbing and muttering to himself because the memories had become too much for him to handle.

Once upon a time she may have willed that kind of hell on him, but with time and really great sex, she’d been able to get over their shared animosity. Sure, it would probably entertain her to see him dive for cover whenever the doorbell went off, but now that they were married it just seemed wrong to take immense satisfaction out of seeing someone screwing with his head.

Unless that someone was her of course.

Just because they were married didn’t mean that she was going to give up something that brought her such joy. She might take it down a notch or two, but she really just couldn’t imagine going through life without screwing with her husband in that way that always seemed to bring a smile to her face. It just seemed wrong somehow to give up that side of their relationship that had kept them together all these years, but she wouldn’t be able to screw with his head if he didn’t survive the initiation.

With that in mind, she climbed out of the tub, after enjoying five more minutes simply because it felt wrong to let all this decadent hot water go to waste, and reluctantly climbed out of the tub. She wrapped a large pink towel around herself and headed for the bathroom door, trying to decide which brother would cave the quickest and tell her where they were keeping Connor as she pulled her hair free from the loose bun she’d made so that she could soak in the tub without getting her hair wet. She stepped into the hallway and headed for the bedroom, deciding that Bryce was her best bet when she saw him.

Lying passed out in the middle of their bed.

Covered in varying stages of drying mud, leaves, clumps of grass, and twigs was her husband, lying passed out on his back. His clothes, the same clothes that he’d been wearing a week ago when he was released from the emergency room thanks to the beating her brothers had dished out to him, were torn, stained and definitely ruined. His short hair was in the same condition as his clothes, messy, full of bits of leaves, and small clumps of mud, but that did nothing to take away from just how truly handsome he was, even with his face covered in dirt, scrapes and about a week’s worth of whiskers, her husband was still an incredibly handsome man, she thought with a smile as she walked over to the bed, dropping her towel as she went.

She climbed on the bed and threw her leg over his lap in one smooth move so that she could straddle his lap while she got a closer look at the damage. Considering that he’d just spent the past week trapped somewhere with her brothers and cousins, she had to admit that he didn’t look so bad. She’d seen men come back worse from an “initiation,” a hell of a lot worse, so maybe they’d lucked out and weren’t going to have to spend a fortune on therapy to fix whatever her relatives had done to him.

One Response to Honeymoon from Hell III….is now available at iBooks & Smashwords