“Whatever you do, don’t start crying again,” someone said from her right as she struggled to open her eyes before adding, “He really seems to hate that.”

“Who?” Ashley tried to get out, but between the grogginess and the soul crushing pain that was currently tearing her body apart, she barely managed to get out a weak grunt.

“The asshole,” he answered anyway as the bed that she was on was jostled, letting her know that he’d decided to join her on the bed, a first for her, but something that she was going to have to ponder later.

Right now, she had other things that she needed to worry about.

“Good job keeping the tears at bay, sweetheart. Appreciate you taking one for the team,” he said dryly as she registered the feel of a large hand giving her head a condescending pat that left her battling the overwhelming urge to slap the owner of that hand.

“So, what are you exactly?” he asked as she felt something placed on her stomach. 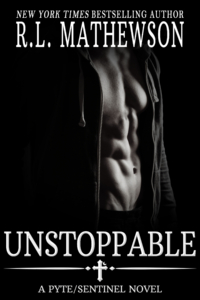 Somehow managing a groan, she blinked her eyes open and stared at the blurry object on her stomach until it slowly came into focus and when it did, she couldn’t help but shift a glare at the bastard sitting next to her as he grabbed a handful of M&M’s from the bowl and shoved it in his mouth. When he saw her glare, he shot her a wink and shifted his attention back to the iPad on his lap.

“Well?” he asked as he grabbed another handful of candy from the bowl currently resting on her stomach.

Deciding that glaring at him wasn’t helping, she shifted her attention back to her body and noted the cast on her right arm, the way that her ribs ached with each breath, and the fact that her legs looked huge beneath the thin blanket covering her, letting her know that her legs were probably broken as well.

“Do you remember what happened?” he asked, sounding bored as he swiped a can of Coke off the nightstand and took a sip while she laid there, licking her parched lips as she imagined just how good a Coke would taste right now.

When he caught her staring at the Coke in his hand he narrowed his eyes and gave her an assessing look. “Even trade. A sip for an answer?”

After a moment, Ashley reluctantly nodded, deciding that she really didn’t have much of a choice in the matter. Not that she planned on answering all of his questions, because she didn’t. What she planned on doing was trying to figure out a way out of wherever here was.

With a nod of his own, he popped another handful of candy in his mouth as he grabbed the bowl and put it aside while she lay there, watching him and noting that he was actually incredibly handsome and had one of those easy going smiles that she’d always really liked. Giving her a reassuring smile, he carefully helped her sit up and made sure to tuck her small body back in before settling back against the headboard.

“So,” he said with that easy going smile as he reached back over and plucked a straw out of a cup on the nightstand and placed it in the soda can for her, “do you remember what happened?”

She opened her mouth to answer, but the only sound that came out was a pained rasp. “A nod or a shake will do,” he drawled as he placed the tip of the straw against her lips.

Throwing him a thankful glance, she took a sip and closed her eyes on a small moan as the cold, sweet carbonated liquid coated her mouth and throat, helping to dull her sore throat and taking the edge off the headache that was pounding at the back of her skull.

“N-no,” she managed to get out as she kept her eyes closed and slowly exhaled, really wishing that she could take something for the pain. Well, she could, but then she’d just end up in a worse situation than she was in now.

“How old are you, sweetheart?” he asked as she felt the tip of the straw pressed against her lips again.

“Forty-five,” Ashley mumbled around the straw, knowing that it would be a waste of time to lie when it would only take a few questions to her landlord to find that out. Besides, she’d rather make him believe that she was cooperating to buy herself some time.

“Forty-five,” he repeated in a thoughtful tone as she took another sip and nearly moaned as the sweet elixir that she would happily drink twenty-four/seven if she could afford it hit her tongue, but unfortunately for her and her sugar addiction, she was on a tight budget that consisted of Ramen noodles, generic pasta with margarine when it was on sale, and water fresh from the tap.

“And what are you?” he asked as he took the straw away.

“In a lot of pain,” she managed to get out as she lay there, silently cataloguing the pain riddling her body only to stop when she reached her hip, because thinking about it seemed to make it worse.

A lot worse, she thought with a cringe as she tried to shift away from the pain shooting up her legs. “How long have I been here?” she whispered, because whispering seemed to be the least painful thing that she could do at the moment.

“We’ve been here for close to three weeks,” he said, making her groan even as she realized that he’d given her a clue.

He’d said, “We,” which gave her a little hope that she might have an ally in all this. He’d also clued her into the fact that she wasn’t healing as fast as she should be. Not that she’d ever really healed fast, but after three weeks the pain should be non-existent at this point even if her bones hadn’t had a chance to heal yet.

“Not going to tell me what you are?” he asked, as he pressed the straw back to her lips.

“There’s nothing to tell,” she said only to end up moaning in ecstasy as the sweet liquid coated her tongue and throat, tasting better and better with every pull of the straw.

How long had it been since she’d been able to enjoy a Coke? Ashley wondered as she continued sipping, not really sure that she’d be able to resist the urge to spill all her secrets for much longer, not if he kept offering her more Coke.

“Nothing, hmm?” he murmured as he took the straw away and before she could complain, he brought it back and she couldn’t help but sigh with relief even as she noted that the Coke had taken the edge off her hunger.

“Failure to thrive,” she managed to explain as she greedily sipped her drink, repeating the same answer that she gave everyone else when she needed to explain why she’d stopped growing when she’d turned ten, hoping that it would be enough.

“So, you’re human,” he said when she felt him shift on the bed next to her as she went still, because this was the first time that anyone had even hinted at the other world that she’d been told to pretend she didn’t know existed.

“What else would I be?” Ashley asked as she continued to sip that delicious beverage, somehow resisting the urge to risk a peek to see if he believed her.

“That’s a good question,” he murmured. “So, then why did he grab you?”

“Who?” she asked with a frown before asking, “The asshole?”

“And that would be…” Ashley said, letting her words trail off as she returned to the life saving elixir even as she started to feel herself drift off.

“Kale Quinn,” he said with a heavy sigh that once again had her frowning, because she had absolutely no idea who that was or why he’d grabbed her.

Well, that wasn’t entirely true, because she actually had several ideas about why he’d grabbed her, but since mentioning any of those concerns would give too much away, she decided to keep them to herself. Wondering what her cellmate or whatever he was had done to land himself here, she asked, “And why did he grab you?” right around the time that she realized that everything hurt, really hurt, more than it had a few minutes ago.

“Oh, shit,” he suddenly said, drawing her attention to the really angry man glaring at them through silver eyes standing at the foot of the bed and before she could ask a question that she probably didn’t want to know the answer to, agonizing pain tore through her stomach, robbing her of the ability to breathe before it swallowed her whole.