An Excerpt from Fated, the next Pyte/Sentinel Novel 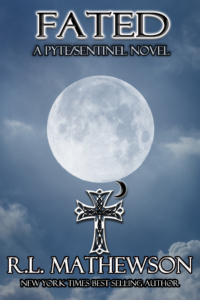 From Fated, the first shifter novel of the Pyte/Sentinel Series….

“I-I can’t feel my legs,” Drew’s Beta, Ryan, a harmless, yet entertaining man said from somewhere across the room.

Kara didn’t bother looking up or even ask if he was okay since she was still trying to figure things out. She’d thought that eating something would help, but so far all he it had done was attract the attention of two annoying werewolves.

Okay, to be fair, Ryan hadn’t been annoying. He’d simply walked in the kitchen, grabbed a spoon, sat down from across from her and started eating. That was it. He didn’t bother her, ask her what was on her mind, or more importantly, anything about Drew. For that, she’d allowed him to live when he’d hogged the section abundant with chocolate chips.

Then he’d shown up and she’d realized that her time for reflection was over, but once again, Drew took her by surprise when he simply removed Ryan rather violently, sat down and joined her for some ice cream. For the first few minutes she’d been on the edge of her chair, waiting for him to say or do something to piss her off and wreck the moment, making the decision to leave the city and try to make it on her own, but to her surprise, he hadn’t said or done anything to piss her off.

But he would. She knew him well enough to know that he was waiting for the perfect moment to irritate the shit out of her. Her nerves were on edge, making every second worse than the last as her anxiety rose even as she prepared several well-deserved comebacks for whatever bullshit that was about to come out of his mouth to piss her off.

All she had to do was wait for it, she decided, narrowing her eyes on the bastard sitting across from her, eating ice cream like it was no big deal.

Instead of asking if he was okay, because let’s be honest here, she really didn’t care, she focused all of her attention on the man who sat across from her, baring her mark and waiting for the interrogation to start all over again or another rendition of his bullshit rules. So, when he suddenly took one last bite of ice cream, stood up and tossed the spoon in the sink before he left the kitchen without a word, she realized that the devious bastard was up to something, which unfortunately for her, intrigued the hell out of her.

Damn, werewolf curiosities, she thought with a heavy sigh as she pushed away from the kitchen island and decided to find out just what the bastard was up to.

“I don’t think that my arm is supposed to be bent this way. Guys?

Rolling her eyes, because the man was just too damn soft to be anyone’s Beta, she walked over to the man laying in a tangled mess on the floor, grabbed his obviously dislocated arm and with a few minor jerks, had the arm locked back in the socket.

She hated to admit this, but she was relieved when he’d finally passed out, because all that screaming and begging for mercy had actually started to give her a headache.

9 Responses to An Excerpt from Fated, the next Pyte/Sentinel Novel